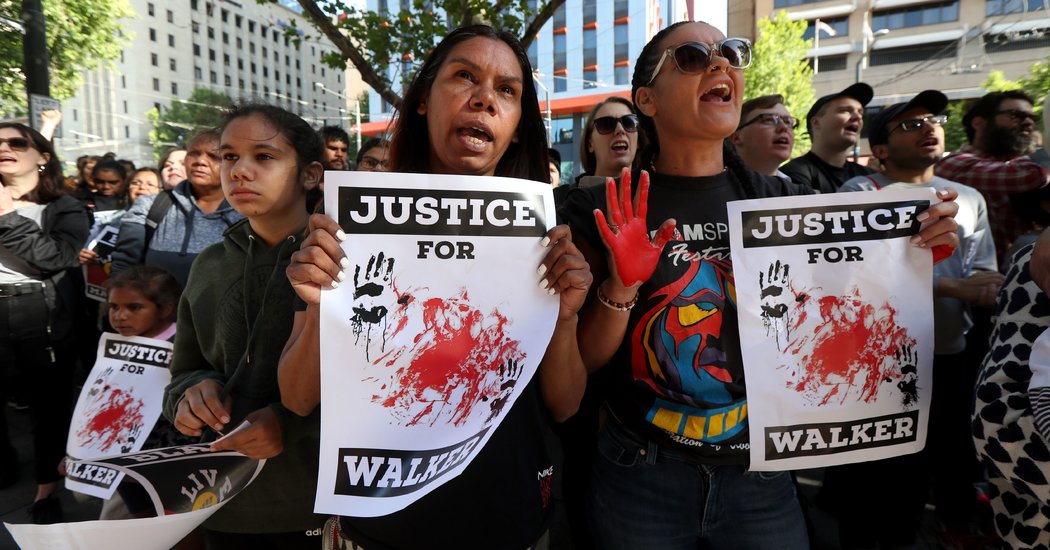 SYDNEY, Australia — Thousands of Australians have taken to the streets this week to protest the police killing of an Aboriginal teenager in a remote community, a case that has added fuel to long-simmering anger over the government’s behavior toward the country’s Indigenous people.

On Wednesday, the police officer who fatally shot the 19-year-old man, Kumanjayi Walker, in the central Australian town of Yuendumu was charged with murder. But questions have continued to swirl about what happened when officers were alone with Mr. Walker, as well as how he and his family were treated in the hours that followed.

Mr. Walker did not receive medical care after he was shot on Saturday, because staff had evacuated the clinic in Yuendumu earlier in the day over safety concerns. That left any medical emergencies to be handled by another clinic nearly 40 miles away.

And after Mr. Walker died, family members who waited outside a police station were not informed about his death until 10 hours later.

“I just cry every day and night,” Napurrurla, Mr. Walker’s grandmother, said in a phone interview from Alice Springs, where most of the community had gathered on Thursday for a march. “We’re just so angry.”

The protests in recent days, in both remote areas and major cities, have reflected the fury and grief among Indigenous people who say they are sick of police brutality.

People in Yuendumu painted red handprints on the police station and held an Indigenous smoking ceremony. They later traveled hours away to Alice Springs to demand transparency from the police. And in major cities across Australia on Wednesday, hundreds of other protesters gathered, some holding signs carrying messages like “Black Lives Matter.”

More than 400 Indigenous people have died while in custody since 1991, the year that a royal commission made 339 recommendations to reduce such deaths. While inquiries have uncovered medical malpractice, no police officer has ever been prosecuted for murder. In 2007, a police officer was acquitted of manslaughter after the death of a man on Palm Island, off the country’s northeastern coast, led to months of riots.

“People have always been very frightened about being in the cells,” said Yasmine Musharbash, a senior lecturer in anthropology at the Australian National University who has been living in Yuendumu. “Now you have mothers telling children to stay the hell away from police. It means that any one of them can shoot you.”

On the day he died, Mr. Walker, a member of the Warlpiri Indigenous group, was in Yuendumu for his grandfather’s funeral, his family and community elders said.

Northern Territory police officials initially said that Mr. Walker had lunged with a weapon at a police officer and that two shots had been fired in an ensuing struggle.

But on Thursday, after the officer, Zachary Rolfe, 28, had been charged with one count of murder and then granted bail, police officials said that an investigation would be opened into the episode. They asked the community to “trust the process.”

Mr. Rolfe will plead not guilty and will “vigorously contest the charge,” Paul McCue, the president of the Northern Territory Police Association, said in a statement.

While the decision to grant bail worried many in Yuendumu, the charges brought hope that justice would be served, they said.

“We haven’t seen a response happen this quickly before,” said Priscilla Atkins, chief executive of the North Australian Aboriginal Justice Agency, who will represent the Walker family.

Otto Jungarrayi Sims, a senior traditional Warlpiri man, called it a monumental opportunity. “It’ll change the course of history for black people,” he said. “There is hope.”